Passing Through by Grace Griffith

PASSING THROUGH, the new album by Washington, DC-area vocalist Grace Griffith, will be released by independent Blix Street Records on July 22, 2014. Due to the effects from Griffith's 17-year battle with Parkinson's Disease, the album took more than two years to painstakingly record; the record's producer Chris Biondo, who also produced and performed with the late Eva Cassidy, opened his studio to Griffith and encouraged her to work at her own pace. The result is a haunting collection of folk and Celtic material revealing the artist's soul. Griffith's soaring vocals are made all the more poignant by her deteriorating physical condition. 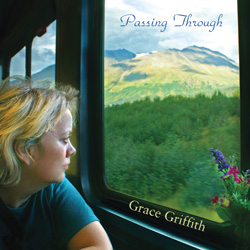 Griffith will perform at a special concert celebrating the release of PASSING THROUGH at The Birchmere Music Hall in Alexandria, Virginia on July 20, 2014 at 7:30PM. She will include material from her 30+ year career and will be supported by a full complement of talent from the Washington music scene. Funds raised will go toward paying for treatments not covered by her health insurance.

Grace Griffith's previous album, SAILING, a retrospective of her Blix Street recordings, was released in 2010 to coincide with her appearance at the Second World Parkinson's Congress, held that year in Glasgow, Scotland. At the time, perhaps even Griffith herself did not know if she would ever again record new material. PASSING THROUGH is a testament to her love of music and the love and support of her husband, friends and the DC musical community. As on Griffith's other albums, her heart and spirit shine through; PASSING THROUGH is a testament to her tenacity.

"No one talked Grace back into the studio," says Marcy Marxer. "If anything, we knew how hard it was going to be for her. Chris Biondo, Lenny Williams and I made it possible for her to do it. Chris saw it through and edited it together, and what he did is difficult, heroic and brilliant."

Griffith's friend Cathy Fink adds, "Chris opened his studio whenever Grace wanted; they had a standing appointment on Saturday mornings. Chris donated his time and expertise and has been an integral part of 'Team Grace.' Over the course of two years, he got out of Grace whatever she could give at that point: from a word or a sentence to a full song. Then he spent hours working to piece it together for the album."

The songs that comprise PASSING THROUGH range from traditional to modern. Their overarching theme mirrors life's complex richness and revelations as observed by someone who has had to deal with more than her share of trials, but never lost touch with the love and truth of the universe. While Griffith does not write her own material, she chose the songs in this collection with a deep awareness of their meaning and power.

The collection opens with Susan Graham White's "Brigid's Shield," a harmonic blending that marks a reunion for Griffith and Graham White who had performed together as the duo Hazlewood in the late 1980's. The song references St. Brigid, one of the three patron saints of Ireland and the protectress of horses, poets and dreamers.

Long-time Griffith favorite "The Wood Thrush's Song" is a return to her a capella roots. The track features a chorus of "angels": Cary Creed, Lynn Hollyfield and Jody Marshall. On the traditional "Bridget O'Malley," Griffith is supported by guitarist Richard Miller, violinist Barbara Lamb and cellist Matthew Tifford. "Nature Boy" includes only the guitar accompaniment of Richard Miller.

Also included is English poet Sydney Carter's 1981 composition "Loud Are The Bells of Norwich," based on a prayer by the 14th century Christian mystic Julian of Norwich. A photo of the Church of St. Julian in Norwich, taken in 1932 before it was nearly destroyed in the Blitz, appears on the album package.

Emmylou Harris' "Cup Of Kindness" (inspired by the famous Robert Burns poem Auld Lang Syne), "Deep In the Darkest Night" by Rick Kemp, "Way Of the World" by Tom Prasada-Rao and the traditional "I Wish My Love Was A Red Rose" are four previously recorded, but unreleased, tracks. Celtic harpist Sue Richards contributes to another traditional tune, "Down By the Sally Gardens," which is based on a poem by William Butler Yeats as well as to Anne Lister's "May Morning."

Griffith's friend Jennifer Cutting wrote "Leaves of Autumn" specifically for this project. Fittingly, it is sung a capella.

"What was will never be again
What will be is uncharted."
- from Leaves of Autumn by Jennifer Cutting

"Water, Fire and Smoke" by Betsy Rose, the only previously released track, was taken from her self-released debut solo album EVERY HUE AND SHADE and later appeared as the opening track of GRACE, the first Griffith album released by Blix Street in 1996. According to Blix Street Records President Bill Straw, "closing the PASSING THROUGH album with the bonus track 'Water, Fire and Smoke' serves as the perfect reprise of what Grace and our label have shared during the past eighteen years."

PASSING THROUGH was produced by Chris Biondo, Marcy Marxer and Lenny Williams; and the previously-released bonus track was produced by Grace Griffith with Jim Fox and Marcy Marxer. The cover photo was taken by Griffith's husband Patrick Holmes, while the liner notes are lovingly contributed by former Washington Post music critic Richard Harrington, a long-time Griffith fan.

The July 20th concert is being organized by Griffith's friend and musical partner Marcy Marxer. The event at the 500-seat Birchmere "will be a beautiful Lovefest, offering encouragement for Grace," according to Marxer. "It's a great opportunity for the DC music community to come together all at once and be supportive of one of their own. The DC area musicians and all the people involved really shine when any one of us have trouble. The level of selflessness of this community is really remarkable."

Cathy Fink adds, "Marcy put together a brilliant approach that allows Grace to do all the singing and performing she can, with all the musical help that she might need. Marcy has chosen some fabulous friends of Grace's who know the material-the cream of the crop in folk and Celtic music. If she can sing a verse and a chorus or more, that's fabulous. It's an opportunity for her to perform, but also to back off if she needs to and know that her friends will be there for her to keep the show rolling in Grace's style."

Monies raised from the concert will go toward paying for speech and physical therapy for Griffith. Insurance covers only 30 therapy sessions a year, and it doesn't take long to use up that allotment. As Cathy Fink notes, "With Parkinson's there's no end to what you'll need, and it changes every day. Special treatments, special voice therapy...it all costs. Parkinson's is not a disease that people recover from or get better from, so it's great to be able to afford additional therapies."

Grace Griffith fans who are unable to attend the show are still encouraged to buy one or more $25 tickets and let the venue know they can't attend so the tickets can be resold. In addition, people can message Marxer via Twitter (@marcymarxer) to let her know they have made a contribution, or if they have contributed in someone's name. Marxer will keep track of all contributions and plans to acknowledge them at the show.Says Marxer, "Grace knows the people around her adore her, and hopefully, she can experience being on stage; but I'm not approaching this as her last show."

The show's line-up will include Marcy Marxer on guitar, mandolin, tinwhistle and percussion; Zan McCloud on guitar, mandolin and bouzouki; Al Petteway on guitar; Lenny Williams on keyboards; Jim Robeson on bass; Debi Smith on bodhran; Chris Biondo on bass and Dave Abe on fiddle.

Singing with Grace will be Randy Barrett, Cathy Fink, Lynn Hollyfield, Lisa Moscatiello, Chris Noyes and Debi Smith. Marxer explains, "There will be a single microphone onstage with a music stand. Grace will come out and do two to three songs. Then she'll go backstage for breaks as needed. Any time she needs help, another singer will step up and sing for her." 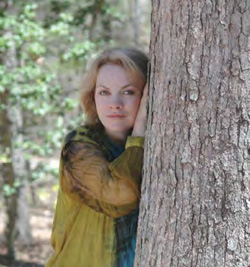 When Grace Griffith received a degree in physical therapy from the University of Maryland in 1978, she put her musical dreams on a back burner and set out to take care of others. She served as director of rehabilitation at Physicians' Memorial Hospital, but never stopped singing. From the late '80s into the early '90s, she was lead singer for the all-female Celtic band, the Hags (Mary Chapin Carpenter took her place when she left), half of the Hazlewood duo with songwriter Susan Graham White, and lead singer of the Celtic group Connemara.

Twenty years later, when Griffith was diagnosed with early onset Parkinson's Disease (only 5-10% of the 50,000 Americans diagnosed each year are under age 50), her training in physical therapy gave her an edge in dealing with the resulting physical and mental challenges. By then, she'd received numerous Washington Area Music Association (WAMMIE) awards as Best Female Vocalist in the Celtic and folk fields. After her debut solo album EVERY HUE AND SHADE, she signed with Blix Street Records in 1995-for which she has released five solo albums plus two with Connemara. Shortly after the release of her first Blix Street album, she brought vocalist Eva Cassidy, a Washington musician and friend, to the attention of Blix Street President Bill Straw. Cassidy died of cancer in 1996 at the age of 33, and Blix Street would posthumously release her remarkable catalogue of recordings.

Linda Ronstadt has focused attention on how the progressive nature of Parkinson's affects singers and musicians. Griffith's own condition has been deteriorating since her diagnosis. She is unable to play guitar, has difficulty walking and has experienced a loss of vocal control.Several years ago, she underwent a radical surgery called deep brain stimulation in the hope of regaining some of her lost abilities and controlling some of Parkinson's disabling symptoms. The procedure is helpful, but the disease continues to progress.

In February of 2014, Griffith moved into an assisted living community outside Washington, DC. She has a steady stream of visitors, many of them musicians. With typical determination, Griffith has been active in Parkinson's-related groups including American Parkinson Disease Association (APDA) and Parkinson's Action Network (PAN). She has appeared at Parkinson's-related conferences, including the 2006 and 2010 World Parkinson Congress gatherings. Her moving medley of the traditional Scottish tune "The Seasons" and "Sailing" from the 2010 event held in Glasgow can be viewed here.

"Life is a celebration, and we're lucky to be here," says Griffith. "Music has always been a focal point in my life. I get pleasure and peace from music. Since Parkinson's Disease has come to live with me, music has become more important than ever."