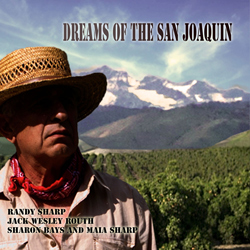 The San Joaquin Valley lies between the Sierra Nevada and the California Coastal Ranges, extending some 250 miles south from the Sacramento-San Joaquin River Delta to the Tehachapi Mountains.

The pre-20th Century anthropological history includes Native Americans, Spanish, Mexicans, Chinese and Japanese. After California became the 31st state in 1850, the Mexican Rancheros were taxed out of existence and divvied up by the new political order.

By the dawn of the 20th century, the San Joaquin Valley was on its way to becoming the "salad bowl of the world." At its peak, the valley produced 11% of America's food on less than 1% of America's soil. Immigrants flowed in from around the world to compete for farm labor jobs with an American Okie/Arkie population that had been displaced from the Midwest before and during the 1930's dust bowl era. John Steinbeck's 1940 Pulitzer Prize winning novel, The Grapes of Wrath, focused the world's attention on the plight of Oakie/Arkie migrant workers during the 1930's.

The songs of the San Joaquin tell the stories of a multi-ethnic population drawn to this vast rural melting pot out of hope or necessity, set to music composed in a majestic western setting…from composers as diverse as Woody Guthrie, the infamous Spade Cooley, Rose Maddox, Buck Owens and Merle Haggard. Country Western music could rightfully include a San Joaquin sub-category of Western Western, if the category of Country Western had not itself slipped from the lexicon. Perhaps the term, "Outlaw," adopted more than a few years ago to describe the music of Willie Nelson and others who didn't fit comfortably into the modern country formula, is the new Western.

Labels aside, Western Music is alive and in good hands. Merle Haggard is still creating, along with other Western writers whose songs have found their way to Nashville from the far west over the years.

Video of the title track

Dreams of the San Joaquin is a collection of songs that pay homage to various musical styles and tales from the Great Valley. The songs range from the dark musings of a solitary stranger…to the light, tight harmonies associated with the legendary Sons of the Pioneers (the group co-founded by Roy Rogers, who spent his early California days as a migrant worker in the San Joaquin).

The creators of this collection are three members of a musical family plus a long-time friend and collaborator, all with deep roots in the San Joaquin:

Randy Sharp, patriarch, musician, producer, recording artist and Grammy-winning songwriter whose songs have been recorded by Emmylou Harris, Reba McEntire and Marty Robbins, to name a few. Seven of Randy's songs have been No. 1 Country singles.

Sharon Bays, wife, mother, and California scholar, started singing and playing in bands with Randy in high school. They performed for many years in the Visalia/Fresno, California area (located halfway up the San Joaquin near the foothills of the Sierra Nevada). Sharon put her music career on hold to pursue a career in academia, obtaining a Masters and Ph.D. in Cultural Anthropology from UCLA, and now lectures there, in the Anthro and Women's Studies Departments. (For a free download of the Abstract of the Dissertation: "Cultural Politics and Identity Formation In a San Joaquin Valley Hmong Community" by Sharon Arlene Bays, write to sbays@ucla.edu or sharonabays@yahoo.com.)

Jack Wesley Routh, friend, musician, recording artist, producer and Grammy-winning songwriter. I first heard Jack Wesley Routh's I Will Return album shortly after it was recorded in 1988 and was immediately taken by the stark, western themes and sound of the album. If only we'd had a record label at the time...fade out, fade in, some 20 years later...

After hearing Maia Sharp on the radio a couple of years ago, we tracked her down and made an agreement to distribute her records. Maia introduced us to her parents, Sharon Bays and Randy Sharp, the producer (and co-writer on two songs) of Jack's long ago but not forgotten I Will Return album.

We then heard The Connection (Randy Sharp's album released in 2002 on Tower Records' 33rd Street label shortly before Tower folded), which quite simply blew us away, as had Jack Wesley Routh's album some 20 years earlier. At that point, we went on-line and filled in the blanks. In addition to the credits listed above, we learned that Randy and Jack had co-written many songs, including "The Connection," which won Emmylou Harris a 2005 Grammy for "Best Female Country Vocal Performance."

Although Jack Wesley Routh was originally from Kingman, Kansas (a small town about 50 miles west of Wichita), he eventually settled in the West. Jack's I Will Return album was released on Wesak, a label owned by Milton Melkonian of Three Rivers, California, a working resort community at the foot of the Sierra near the entrance to Sequoia National Park. When we heard Jack's album our first thought was that Johnny Cash should hear this guy…little did we know that Jack had enjoyed a rich and colorful history with Johnny, long before he fell under the spell of the San Joaquin.

Jack had made the pilgrimage to Nashville in the early 70's and, after being put-off by Johnny Cash's front office, spotted Cash working in the yard and persuaded him to listen to his original songs. Johnny signed Jack as a songwriter that day, and during the next few years, Cash recorded Jack's songs, co-wrote with Jack, Jack became Cash's guitarist and co-produced a couple of Cash's albums, the two traveled the country as compadres, and Jack became Cash's double son-in-law (not at the same time!). It's a tribute to Jack's charm that the two remained friends to the end, though when Jack would open for The Outlaws, Waylon Jennings would introduce him by saying, " with all of those daughters, Johnny Cash has only had two bad son-in-laws, and here he is..."

Jack's songs have also been recorded by artists such as Waylon Jennings, and Emmylou Harris (including "Shores of White Sand" and "Beyond The Great Divide"). Harris' version of the latter is included in the HBO Game Change film, and Jack's versions of both songs (from his I Will Return album) are included in this package.

After spending a weekend re-listening to Jack's 1988 and Randy's 2002 albums, we approached Randy and Jack about combining songs from both albums into one album of music steeped in the San Joaquin. We were all on the same page. Dreams of the San Joaquin, which addresses the continuing plight of San Joaquin migrant workers, would be the title song and close the album. Co-written by Randy and Jack, it has been recorded by both, as well as Linda Ronstadt. The lush production of "Dreams" (from Randy's The Connection) also features another family friend, Louie Ortega, who repeats each line of the final chorus in Spanish. An intimate "campfire" version of "Dreams" (an alternate take from Jack's acoustic Another Season album) is available as a download.

The "Dreams" album also includes Maia's original demo of "A Home," a song co-written by Randy and Maia which became the title song of the Dixie Chicks' 2005 Home album. "A Home" had been scheduled to be the next Dixie Chicks single when Country Radio turned on them after their President Bush troubles.

The original demo of Sharon Bays' performance of "For Old Time's Sake," a classic in waiting written by Randy, was the final piece on an album that presents the work of a musical family and friend steeped in the tradition of the San Joaquin.